I need to get a cat...stat. He/she will be black and dubbed "Coal". And I shall love Coal forever more.

I am so thrilled to announce I've gotten her. Coal is real and has invaded my heart, mind and soul. I already love this little furball with everything I have, and more.

Because memories can so easily fade, I'd like to chronicle Coal's adventures as she skittishly explores her new home.

On the morning of 16 April  2016, I woke up with nervous excitement, butterflies causing a riot in my tummy. I had good reason - I was going to pick Coal up from the shelter.

During the last week of March, I strolled into Cat-a-holics, the shelter in Rosebank and asked if they have a black female kitten for adoption. They did. Merien, one of the owners, directed me to her cage. There were three other kittens there too. Coal was shy, and she ran behind her bed. The other kittens were suckers for attention. I liked Coal because she was shy. It reminded me of  myself. I paid the deposit for her and told Merien I'll get by 16 April. In the interim, I visited her twice. Once, with my editor, Mary, whom Coal hissed at. It showed me how feisty she is. 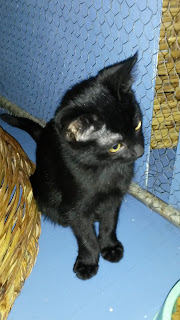 I spent the two weeks chatting to my good friend, Alysha, and Mary, both cat owners and self confessed cat lovers, about what I should get. Their knowledge and expertise proved invaluable. I felt I could prepare for the little one's arrival more than adequately. I spent two weeks slowly shopping for her things.

Alysha and I went together to the shelter. For years, she's been sending me pictures of black cats in pet stores, asking if she could get me one. We agreed  when I do find my cat, we'll go together. And so we did.

I set up the downstairs bathroom with everything Coal needed: litter box, a scratch post, toys, covered bed, blankets, food and water bowls. She immediately sought shelter behind the toilet. I thought I should let her be, but Alysha has experience with cats, she has one of her own, Loki. She retrieved Coal, and trimmed her claws for my sake since I had to admit, I was a little afraid. 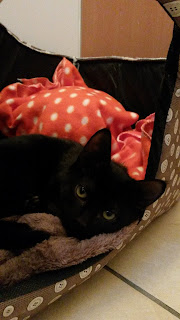 So after my first week having Coal, these are some of the highlights:

Become a chocolate lover too:

May you all be blessed with beans

Send your thoughts (and typos):

Hunched over their PC

This work is licensed under a Creative Commons Attribution-Noncommercial-No Derivative Works 3.0 License.